In one of the U.K.’s most extensive infrastructure developments, the Milford Haven Gas Connection Project extends over 300 km (190 mi) across South Wales. The pipeline was created to deliver liquefied natural gas (LNG) from a port at Milford Haven, providing up to 20% of the U.K.’s natural gas for owner National Grid.

Constructed in two phases, work began on the pipeline in early 2006. Both phases were finished in November 2007. Phase I involved a 120 km (75 mi) long stretch from the towns of Milford Haven to Aberdulais. Phase II of the project extended the pipeline another 185 km (115 mi) from Felindre to Tirley in Gloucestershire.

B&W Tunnelling opted for the Motorized SBU (SBU-M) due to the challenging contractual line and grade restrictions on their four longest bores. The 50 mm (2 in) tolerance meant they needed a machine with increased accuracy and continuous monitoring.

The Motorized SBU is a manned-entry, hard rock boring machine used for longer bores (over 150 m/ 500 ft in length) and for line- and grade-critical crossings. The machine is used in conjunction with a standard Auger Boring Machine (ABM) or pipe jacking unit and is welded to the lead casing in the same fashion as SBU-As. The machine is continuously steered from an operator’s console inside the rear shield, and uses a laser targeting system to monitor the machine’s heading.

B&W utilized two Motorized SBUs, one for hard rock and one for mixed ground. The mixed ground cutterhead featured 9.5″ diameter single disc cutters and larger muck openings to tackle the sections of rock interbedded with clay and gravels. 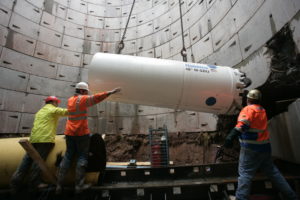 Each of the Motorized SBU crossings required the use of 10 to 30 m (33 to 100 ft) deep launch and recovery shafts. The 10.5 m (35 ft) diameter shafts were lined with concrete-bolted segmental rings and were used to install the pipeline after the crossing had been excavated. Sacrificial casing (steel, 1.2 m/ 48 in O.D.) was used to provide the necessary forward thrust to the cutting face from the ABM. The pipe was later removed and a semi-automatic welding bug was used to install the final pipeline.