Built for Mines by the Experts in Tunneling.

Until now, the excavation of mining drifts and access tunnels has been accomplished through often slow and arduous drill and blast methodology. Historically, mechanized tunneling methods have lacked the customization needed to aid in expediting mining activities. The Robbins MDM5000 has changed all of that.

Designed specifically for the excavation of long drifts and access tunnels, the MDM5000 offers excavation at twice the rate of drill and blast. The rectangular profile eliminates the need to pour a road bed or cut the invert, allowing for immediate use by the mine’s fleet of vehicles. 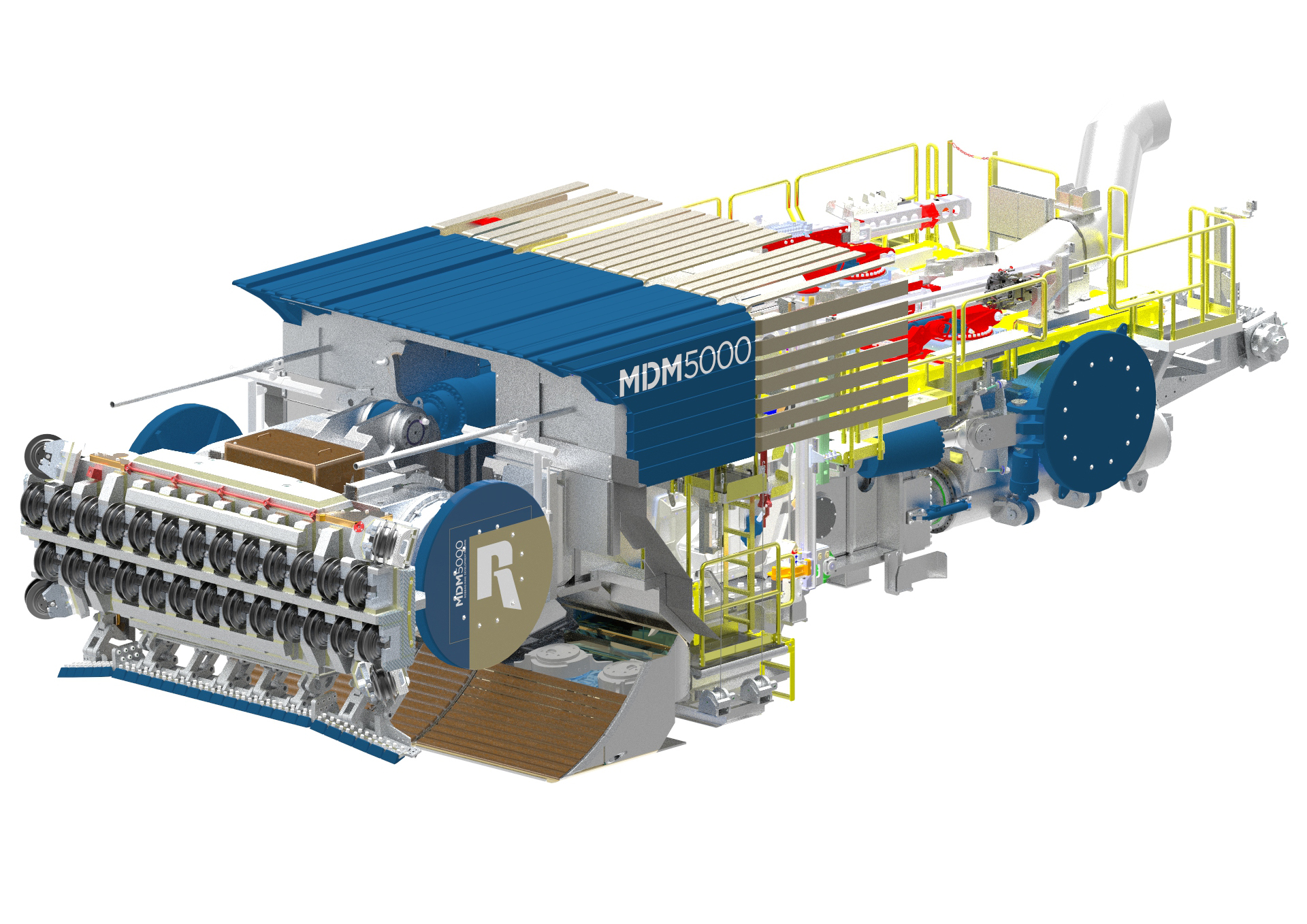 The Mine Development Machine (MDM) is a type of non-circular tunnel boring machine (TBM) developed for use in underground mining in rock up to 200 MPa UCS, particularly for long access tunnels and development drifts. Unlike traditional rock TBMs that bore a circular cross section tunnel, the MDM utilizes a reciprocating cutterhead to bore a rectangular cross section tunnel with a flat invert. The flat tunnel floor is beneficial as it enables the immediate use of rubber-tired vehicles for materials and crew transport. In comparison, if rubber-tired vehicles are to be used effectively in a circular bored tunnel, a flat roadway must be created by pouring a concrete floor or installing invert segments.  The rectangular tunnel can be a smaller cross-sectional area to achieve the same useable roadway width. This means less material must be excavated and hauled to the surface to create the roadway tunnel. The MDM utilizes much of the same technology as a tunnel boring machine, including disc cutters that each run in the same track during a boring cycle. During boring, grippers extend against the tunnel walls, reacting the machine’s forward thrust as in standard TBMs. Hydraulic propel cylinders extend, pushing the cutters into the rock. The transfer of this high thrust through the rolling disc cutters creates fractures in the rock, causing chips to break away from the tunnel face. A unique floating gripper system pushes on the sidewalls and is locked in place while the propel cylinders extend, allowing the main beam to advance the MDM.  In addition, continuous ground support is placed immediately behind the cutterhead in a pattern that is mine-standard. Ground support and installing of utilities such as piping, ventilation, and lighting are done simultaneously to boring. Because the rock is mechanically fractured, no secondary crushing is required, and the broken rock is well suited for conveyor haulage.

“We decided to work with Robbins for their experience. A lot of people have tried to provide these kinds of machines but nobody has done it. Robbins used their experience and their skills to provide us with a rectangular profile machine.”

Successful Use at Fresnillo Mine

The MDM5000 design has been tested and proven in Fresnillo at Mexico’s oldest silver mine. The machine has bored at rates of up to 52 m in one week and 191 m in one month in andesite and shale with quartz intrusions that have defied earlier excavation attempts with roadheaders. Watch the video to find out more.

Whether you are in the planning phase of building a greenfield mine or looking to develop access to an underground ore body, our engineers can help you identify the best solution to achieve your objectives. For more information, contact Robbins at your nearest location.